Home Blog To my African bro – The killer truth

To my African bro – The killer truth

I am writing you this as a result of the picture you posted in a Facebook group we both belong to. I think the picture tells a poignant story. I have read the reactions so far. As to be expected, they vary from disbelief to denial, from acknowledgement to acceptance. Some reactions are downright hostile depending on the outlook people have in and about life. Well James, let me give you my analysis.

The grass is always greener on the other side. I can relate to the picture above having lived half of my life in Africa and the other half in Europe. But the reasons I can relate to it are not the obvious ones. It is the work ethic and the way Africans & non-Africans view money. It is also how people place value on themselves.

What has struck me about the way the average non-African view money is that money is personal. It is separate from emotion. You need money for personal survival so you work for it. If every single person works for his own money, the whole community becomes rich. The non-Africans know the value of money and also know how to value themselves moneywise. Knowing your money value is seen as just a normal way of life. Money talks only when people talk. If you value yourself high, people will tend to pay you higher because they are going to get a higher value. At least that is the thought. From an African point of view it looks like all non-Africans are rich. What they actually are, is self-sufficient. They work their ass off for it. But they work very smart for it too!

Africans on the other hand, view money as non-personal but can never separate money from emotions. Africans need money for personal survival too. But they wait for it. Many are waiting for someone they know to be rich so that he can take care of the community. If one person is rich in the community, that community is in fact poor. Africans actually don’t know the value of money (even though they think they do) and as such don’t know how to place value on themselves moneywise. Africans see and worship money instead of making money work for them. Money talks in Africa only when the rich man talks. Africans continue to value themselves low so people tend to pay a lower value because they are not expecting anything high anyway. At least that is the thought. From the non-African point of view, it looks like all Africans are poor. What they actually are, is misguided. They work their ass off. But they work hard without working smart!

I will give you 2 personal examples to illustrate the differences in the attitudes and approaches I stated above. I organise Africa Night; a monthly get-together of lovers of African music. I do this in the Netherlands. Over the years I have made many friends from all nationalities. When my good friends who are non-Africans come in, we greet each other and exchange pleasantries and catch up. Then they pay the gate fee and have fun on the dance floor. Sometimes I buy them drinks and sometimes they buy me drinks; you know, the stuff friends do on a night out. 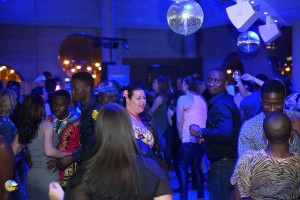 When my African friends come in, we greet each other and exchange pleasantries and catch up. Then they just walk past the lady who collects the gate fee! Why? Because they are my friends! If I say to them they have to pay like everyone else, then you see their mood changing. “Oh Femi so we have to pay now to come to your party?” “Then you should pay for us!” These are just 2 of the printable stuff they say to me. If goodness forbids and I make them pay, that usually is the end of the friendship. They are going to have long faces all night. In some extreme cases, they even turn back and go home.

The thing is, I have a business to run. I have bills to pay too! I rent the hall, have to pay the DJ and other people who work for me. If you come in free, it means I am paying you from my own pocket to come and have fun! If you are a true friend, you will know that is not fair. Especially not when I see you later ordering a €100 bottle of Hennessey just because you want to impress a lady you just met at the show.

The other example is an African friend who does some personal work for my son (I won’t specify because I don’t want him feeling like I am publicly crucifying him but if he reads this he will recognise what I am writing). For the past 12 years or so, we go to his office and we chat, make fun and when his work is done, I pay him and we leave. He runs a business but over the years we’ve become good friends too. I have even done a free promotional video for him to promote his business, his art and his philanthropic goals. In 12 years though, I have never failed to pay him immediately for the services he renders to my son. Last September he asked me to build a website for him. I gave him a quote which he accepted. I them proceeded to do his work as specified and he was very satisfied with the end result.

To cut the long story short, he has only deposited 1/3rd of the payment to my account as we speak today, 31st of March 2016. This is even though the billing terms we agreed on said he had to pay the full amount within 14 days of receipt in September 2015. Even the 1/3rd was paid in November 2015! This is a guy who runs his own business and who knows the business and tax codes of The Netherlands. For 3 quarters now he has defaulted, I cannot balance my books. My accountant and the tax office are chasing me all over. Why? Because of my African bro! In the 7 months since then I have done many services to non-Africans who have not defaulted. I know now who I am am definitely not doing business with in the future. It is a question of self-worth and value.

Talking of self-worth, does anyone know Professor Stephen Hawking? Hawking has amyotrophic lateral sclerosis (ALS), commonly known as motor neurone disease, which has gradually paralysed him over the decades. If that guy was born in Africa, he would be long dead. If not, he would be on the roadside begging for money. Instead he is a world renowned theoretical physicist and cosmologist. Why? Because every non-African knows his value and the society recognises that whoever or whatever you are, you have to do your bit to contribute to the society. Only then can you be truly respected.
On the other hand, we see a whole generation of able-bodied young people in Africa wasting away. They are waiting for the rich uncle or sister to come and help them. You cannot keep begging for money and ask for respect at the same time. Whenever some family member approached me in the past about a business they want to start in Africa I always ask the same question. Strange enough, I always get the same answer. I ask “do you have a plan?” The answer I always get is “just give me the money I am asking for I know what I am doing”. People always seem to think money is the first thing you need when you want to start a business. I keep saying to them, the last thing you actually need to start a business is money! There are several other things you need before you get to money.

James, I feel I could write a book on this but I will round up now before I bore you. Having lived my life equally in both Africa and in Europe, I can conclude that the difference between the 2 when it comes to helping each other is that the non-African knows that you can only be of value to others if you value yourself first. It is the first rule of First Aid. The African on the other hand demands to be respected while he at the same time is asking you to pay his bills.

You see the difference between the Africans and non-Africans is in the packaging. Physically both are the same. They both shit, they both backbite, they both cheat, they both feel pain and joy, they cry, they kiss and have sex etc. But one knows his worth and works smart every day to raise his value, the other looks at them all day and dreams all night of one day becoming like them. He dreams and extends his hands to beg for breadcrumbs. By the time he finally wakes up, he is an old and bitter man. Europe, America, Asia etc. present themselves better. But the real human and natural resources are in Africa. The problem is that the Africans are busy admiring how green and well-kept the gardens of the non-Africans are. They fail to see that if only they spend a fraction of the time on their own garden, they will realise they have been living in paradise all along. That, James,  is the killer truth!