We realise we are late in bringing you this sad news but Africa has lost one of her foremost fashion designers. Patou Manga, known for his signature fashion pieces “Patoustyle” which brought him close to hip hop legends and fashionistas like P. Diddy, Kanye West and other big names in the fashion industry, is dead. Patou Manga, who is Cameroonian but also based in Paris is known internationally for his dandy urban style, died on Sunday July 24 2016 after having a cardiac arrest. He was just 38 years old. He is known for his iconic fashion shows in Cameroon and the diaspora. Known for his swagger, street style and dapper looks, he was a force to reckon with in the African fashion industry. 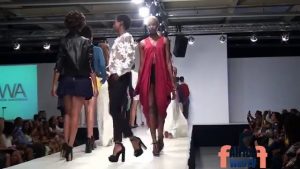 He was one of the designers at first Africa Fashion Week Amsterdam held in 2014 (video below). Africa Web TV’s senior reporter/producer Phay Mutepa met and spoke with him briefly during that show “You could see he had loads of talent. It is such a great loss to the fashion industry and he will be missed. He was really creative in a classy way. He makes designs I can take from the ramp straight to the streets”

Check out the video of his collections during the Africa Fashion Week Amsterdam 2014. Patou himself could be seen from 17.10 minutes of the video. He will surely be missed but his legacy will live on. Rest in Peace Patou Manga.