Home Blog Why are Europeans eating Africans as dinner?

Why are Europeans eating Africans as dinner?

Africa Night Productions (the mother company of Africa Web TV) was awarded the Africa Entertainment Award during The Voice Achievers Award 2016. This is naturally a champagne moment for us. It is like putting a crown on the work that started more than 18 years ago and in the case of Africa Web TV, more than 4 years ago. It is also a time for us as a media organisation to make an appeal to the people we primarily serve and promote; The Africans.

Our goal has always been to serve Africans and Africans at heart. This is because we believe only we as Africans can truly tell the African story. How many times have we as African being frustrated by the way the mainstream media portray Africa? We watch/read/see the news about our beloved continent and we shiver at the wrong portrayal through the eyes of the Western media. If Africa ever makes the major news bulletins, it is always about war, poverty, corruption and other negative stuff. 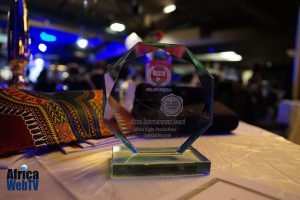 We Africans however know better. We know that ours is a beautiful continent. We know we have enough natural resources to be a great continent. We know the majority of the peoples of Africa are not living in nor dying of hunger. We know we have fertile lands that could feed the world if we get equal and fair access to the right markets. We know we are a beautiful, intelligent and special people. Why else would millions of people from all over the world visit Africa every year?

Yet if you ask the average man on the streets of Europe, he would have a totally one-sided, negative picture of Africa. Even in 2016, we at Africa Web TV no longer show any surprise when people ask us if it is true that people live on trees in Africa! We can point the finger and blame them for their ignorance. But having worked at Africa Web TV for the past 4 years plus, we have to be honest and say the problem lies mostly with us Africans.

We as Africans have not yet put value on the media. We are too eager to consume and less ready to shape the media through our participation. We don’t trust the Western media but even when the media is African, we are still always on the run. From our experience at Africa Web TV over the years, it is frustrating to see that while the average European see the media as an opportunity to tell (and shape) their stories, we Africans see the same media as a threat we must run from!

Whenever we are doing any item, we know we need to call or track down at least 30 Africans if we want to be sure we would finally get one to speak on camera. Whereas we only need to call or track down an average of 3 Europeans to get one to speak with us. The question is; what right do we as Africans have to complain about our wrong portrayals if we are not ready to tell our own stories? People still go to Africa and stay there until they find that one shirtless child in the village so that they can get all the likes on Facebook. What do we as Africans do to show there is more to our beloved continent than that?

The fact of the matter is that if you are having a dinner with your friends and family, the one who is not at the dinner table would most certainly be the object and subject of most gossip. He is not there to defend him/herself so he/she is the soft, easy target. It is human nature. Africans are never at the dinner table because we are too busy to see the importance of the dinner. We are then left with the leftover and we start complain that the food is tasteless. Where were we when the choice of dinner was being made? Where were we when the dinner was being cooked? So when the Western media and people recycle all the table gossip about Africans, what rights do we have to complain? In short Africans need to realise that if they are not at the table, they are the dinner. Period!

So as Africa Web TV basks in the glory of being recognised with an award for her services to Africa this year, our appeal is to fellow Africans to take control of their media image. Pictures and videos tell a million stories, but the true stories are told by those involved in the stories. It is easy to be in a hurry, to call off your appointment with a media organisation at the last moment, to say “sorry brother/sister but you know we Africans don’t like to be on TV” and whatever excuse you might invent. Once you refuse to tell your own story, you lose the right to complain when someone else stands up to tell your own story and define you!

The main difference between Africa and Europe is in the packaging. The Europeans have learnt the art of beautiful packaging while Africans are still thinking that being alive and minding their own business is enough. The fact is, why should the Europeans care about you if you don’t care about yourself? How would the world know about the beauties of Africa if Africans are scared to tell the world about it?

So next time we go on the streets we hope Africans would be less uptight and be more willing to share their beautiful stories. We are Africans too and we know the world is waiting to hear our many stories. Let us together start taking control of our own image and future. Let us beat our chests and be really proud of what we have to offer to mankind. Don’t let us be satisfied with the tasteless, leftover dinners served by others. Let us be the one to decide what’s for dinner. Don’t be shy. Otherwise you must forever hold your peace!

Let’s hear what you think. Leave your comments!